Now that the Cornhusker State has a free hand to prohibit abortion thanks to last year’s U. S. Supreme Court decision in the Dobbs case, it is imperative that the Republican majority in Nebraska’s Unicameral operate in such a manner that a minority of Democrats and a handful of RINOs (“Republicans In Name Only”) cannot block such baby-saving legislation.

At least in recent years (and perhaps stretching back to a fateful rules change in 1973), the Unicameral’s Republican majority has failed miserably in fulfilling this important duty to the people of Nebraska who elected such a large GOP contingent.

The problem starts at the beginning of each two-year session in the Unicameral.  In this year’s session, there are 32 Republicans and 17 Democrats.  This means that Republicans control the Legislature, and the Unicameral’s organization should therefore reflect Republican priorities and provide the mechanisms to enact them into law.

This also means that, because of the overwhelming Republican majority, every Committee Chairman should be a Republican who supports the conservative, pro-life Republican agenda embraced by most Cornhusker voters.

Unfortunately, however, this is not the case.  To understand the reasons behind it, readers need to recall some lessons from their high school civics classes.

There are typically fourteen Standing Committees, and once bills are introduced, they are assigned for evaluation and re-working to Unicameral committees, which either approve them, vote them down, or allow them to die without action.   If approved in some form, the bills then move to the full Unicameral for approval, amendment, failure to consider, or outright defeat.

This is where the first Republican-caused problem occurs.  The Nebraska State Constitution requires (at Article III, Section 11) that “[a]ll votes shall be viva voce” (which means by “voice vote“ as opposed to written ballot).  Despite this Constitutional requirement, the Republican majority (probably illegally) has allowed election of Committee Chairmen not just by written ballot, but by secret written ballot, rather than by the Constitutionally mandated voice vote, which is a very public event, observable by every interested Nebraska voter. 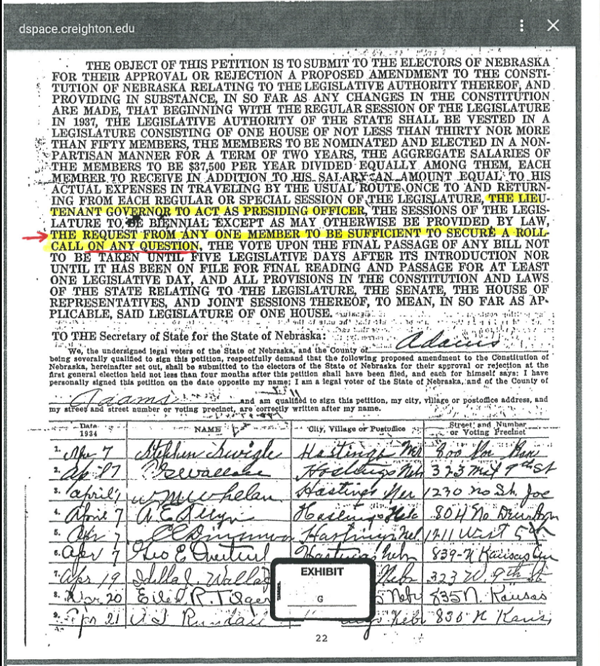 It gets worse, however.  As shown by wording in the accompanying 1934 petition for a Nebraska Constitutional Amendment to abolish the bi-cameral legislature (and replace it in 1937 with its current Unicameral structure), it is clear that U.S. Sen. George W. Norris (the “Godfather” of our supposedly “non-partisan” legislature) intended that “THE REQUEST FROM ANY ONE MEMBER [OF THE UNICAMERAL] … BE SUFFICIENT TO SECURE A ROLL-CALL VOTE ON ANY QUESTION.” [Emphasis Added]

One such question deals with the election of Committee Chairmen in the Unicameral.

Because the wording of the 1934 enabling petition for the Unicameral (the “Enabling Petition”) and of the Constitutional clause quoted above, the Republican majority has been secretly electing Democrats to key Committee Chairmanships (such as Judiciary and Education), where important legislation that affects our state’s culture is assigned.

The Judiciary Committee, for example, handles bills related to guns, abortion and religious freedom.  The Education Committee handles bills that affect the intellectual and social formation of Nebraska children.

This shameful “Republican-enabled” committee dominance by Democrats and RINOs is why key pro-life and other conservative legislation has often failed to emerge from committee for a full vote by the Unicameral.  To compound matters, timid Republican Senators have apathetically not filed suit to rectify this apparently illegal situation or to gain judicial clarification with respect to it.

This means that the voters of Nebraska have no way of knowing “which Senator voted for whom” when it comes to Committee Chairmen.

The second Republican-caused problem is allowing Democrats and RINOs to have key Committee assignments out of proportion to their numbers in the overall Unicameral.

Conservative Republicans should dominate on these important committees (which is what most voters want), but they do not in fact control them, thanks to the timidity of Republican Senators who hide behind a secret ballot that should be replaced by the Constitutionally mandated “voice vote,” which is most effectively done through the Unicameral Enabling Petition’s “roll call” language, where each Senator’s vote is supposed to be public.

The third Republican-caused problem is its failure to vote for rules at the beginning of each two-year Unicameral session that would require three things:

First, that the Unicameral rule allowing “secret ballots” (such as for election of Committee Chairmen and the rules that will govern the Unicameral) be changed to a wholly public voice vote by roll call.

Second, that all Committee Chairmen be of the majority party in the Unicameral, and that assignments to key committees reflect the party make-up of the entire Unicameral.

Third, that the filibuster requirement (which allows a minority to block majority-supported legislation) be reduced from 33 votes to no more than 30 votes (which is already the number of votes required to override a Governor’s veto of legislation passed by the Unicameral).

There is no rational reason why it should take more votes to break a filibuster than it does to override a gubernatorial veto of legislation.  The current 33 votes is absurdly high, and it even exceeds the percentage of votes required to overcome a Presidential veto by the U.S. Congress.

Liberals like Lincoln Journal Star columnist Don Walton will argue against these positions because of the formally “non-partisan” nature of our Legislature.  But anyone who has watched the Unicameral in action knows that “non-partisanship” is a legal fiction.  Democrats and RINOs use this concept when it suits them.  But when the chips are down on legislation related to the preservation of abortion or the expansion of LBGTQ “rights,” the Democrats will almost always vote as a bloc.

It is The Cornhusker Guardian’s hope, however, that voters will seek immediate commitments from their current Senators as to their positions on:

Once the conservative voters of Nebraska have this information in hand, they can act on it at the ballot box in 2024.