In an action that ironically occurred on St. Valentine’s Day, the Lincoln City Council adopted an ordinance redefining the word “sex” in portions of the city code to mean “male, female, neither, or both, including sexual orientation and gender identity.” The City Council passed its so-called “fairness ordinance” on a 5-0 vote, with two members being absent.  The council and mayor claim the benefit of this sweeping change to the city charter is to prevent discrimination. History, however, shows that this kind of radical change in the law primarily results in persecution of those who do not accept this redefinition of what it means to be a person, and for any number of reasons, including religious belief, conscience, or simply out of common sense.

The Nebraska Family Alliance (“NFA”) filed a petition the very next day to require the city council to rescind the ordinance or to put it to a vote of the people of Lincoln. Calling its campaign “Let Us Vote,” the NFA objected to the “fairness ordinance” on many grounds – from the prospect of forcing a dangerous gender ideology on society to grave threats to business owners and religious organizations. It also describes the effects of this ordinance as an assault on women in particular. The ordinance change, for example, would allow men who “identify” as women access to women’s showers, restrooms and locker rooms.  It also opens up the possibility that males will compete as females in girls’ and women’s sports.

The NFA emphasizes that this ordinance empowers city government, through a mechanism of the Lincoln Commission on Human Rights, to punish citizens who hold biblical beliefs on marriage and human sexuality with civil penalties and “life-ruining” fines that start at $10,000 and go up to $50,000. As such it is an attack on the fundamental First Amendment rights of speech and religion. The precious constitutional right to religious freedom protects people’s right to live, speak, and act according to their beliefs peacefully and their ability to be themselves in the public sphere.

Ignoring the Will of the People of Lincoln

By passing this ordinance, the city council is ignoring the clear will of the people of Lincoln. In 2012, a referendum petition was signed by more than 10,000 voters requiring this very issue to be voted on or the 2012 version of this change to the city code be rescinded. Neither was done. Instead the Lincoln City Council shelved the issue and did not allow the people to vote on it. The current city council has now put forth a similar, but more encompassing and extreme, version of the very changes that the citizens successfully demanded a right to vote on ten years ago.

An Attack on People of Faith

Lincoln residents who hold a biblical worldview object to redefining “sex” based on a few core realities:

It is for the above reasons that the “fairness ordinance” is seen by many in Lincoln as a direct attack on all citizens of faith and an attack on everyone’s constitutionally protected religious freedoms. 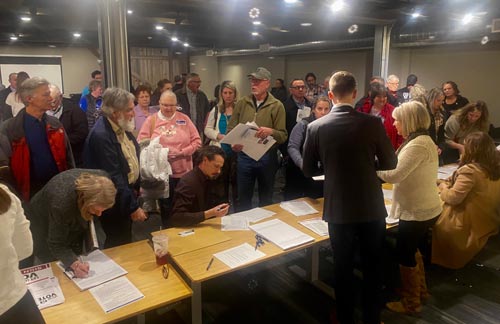 The Nebraska Family Alliance petition drive to require the Lincoln City Council either to rescind its vote, or to put such a dramatic change in the city charter to a vote of the people, has just 15 days to accomplish its task.  The clock started running from February 15, 2022, for the Alliance to gather approximately 4,200 signatures from registered Lincoln City voters. This figure represents 4% of the participating voters in the last gubernatorial election. The Nebraska Family Alliance faces a challenging task, but its leaders hope that (because this ordinance defies both common sense and natural law) the will of Lincoln’s people can result in a successful conclusion to its efforts.

Churches are being encouraged to get involved in this petition drive, because churches are a direct target of the ordinance.  And despite fears expressed by some leaders of the Catholic clergy, there is absolutely no legal or IRS obstacle to churches gathering signatures thanks to the non-partisan nature of the petition.

More information can be found at https://nebraskafamilyalliance.org/let-us-vote/