When Nebraskans go to the polls in November, they should remember that many of the failures to pass strong pro-life legislation, most recently in the wake of the U.S. Supreme Court Dobbs decision, are the result of years-long failures by the GOP to take advantage of the strong Republican majority in the Unicameral.

The following article from LifeSiteNews identifies one of the main Republican culprits in this shameful state of affairs.

LINCOLN (LifeSiteNews) – A liberal Republican in the Nebraska Senate garnered headlines this week for advocating in jest that government mandate vasectomies, indulging a false equivalency popular among pro-abortion activists. 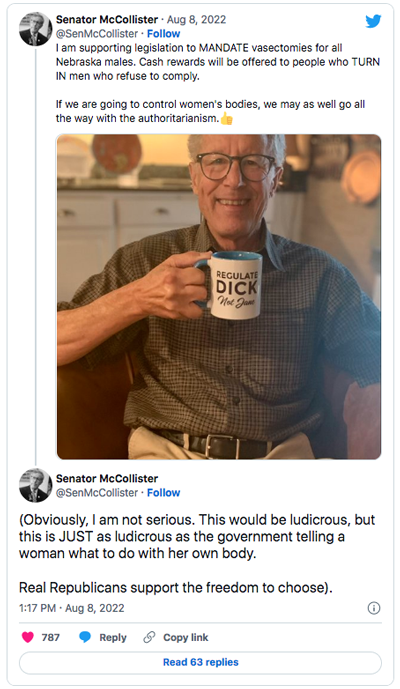 “I am supporting legislation to MANDATE vasectomies for all Nebraska males,” Sen. John McCollister tweeted August 9. “Cash rewards will be offered to people who TURN IN men who refuse to comply. If we are going to control women’s bodies, we may as well go all the way with the authoritarianism.”

“Obviously, I am not serious,” he continued. “This would be ludicrous, but this is JUST as ludicrous as the government telling a woman what to do with her own body. Real Republicans support the freedom to choose.”

“It’s ironic, some people don’t want the state to get between them and their doctor with regard to vaccines, and so now here we have the state, the state of Nebraska, wanting to restrict reproductive rights for women, and that just isn’t right,” McCollister added in later remarks to KLKN, claiming he wants abortions reduced but that increasing “access” to birth control is a better way to go about it.

Equating a vasectomy with an abortion is a common pro-abortion trope meant to paint banning the latter as sexist, despite the fact that polls consistently fail to show a gender gap in public opinion on the issue, as well as a fundamental difference between vasectomy – which inhibits the ability to conceive a child – with abortion, which kills a living child who already exists (and is not part of a woman’s body, despite the popular pro-abortion talking point to the contrary).

Further, while human biology means that only women can get pregnant, which pro-aborts take to mean that only women are put in a position of “needing” abortion, it is also the case that pregnant women are the only ones who have a legal ability to dispose of their children before birth. Male Americans have no such power, nor are there nationally-visible advocates of giving men such a power — with the notable exception of men who attempt to force women into unwanted abortions, sometimes with the assistance of Planned Parenthood.

Across the country, abortion giant Planned Parenthood has suspended abortions and/or closed locations in reaction to the Supreme Court’s June overturn of Roe v. Wade, and pro-life attorneys general have declared their intentions to enforce their states’ duly-enacted abortion prohibitions.

But leftists prosecutors in dozens of localities have vowed not to enforce such laws, and pro-abortion activists have refocused efforts on supporting interstate travel for abortion and enshrining “rights” to abortion in state constitutions, ensuring that work and debate will continue over the prospect of banning abortion nationally. Meanwhile, President Joe Biden has called for electing more Democrats to Congress to support codifying a “right” to abortion-on-demand in federal law.