Nebraska families feel it in their gut – things are WAY more expensive than they were last year, or even a few months ago. Steve Cortes – in this video and story – pointed out on Bannon’s War Room that the “inflation inferno” we are experiencing is much worse than the government and the FED are telling you. The necessities (utility costs, gasoline, groceries, and electricity) are running at 24+%, as high as it was in 1980, not the 8.5-% that the “authorities” are telling us. At the same time, consumer confidence is as low as it has ever been. Information about reality is crucial to navigating these times, and the “official story line” is highly inaccurate. Watch the video or read and listen to the story here from this Gateway Pundit article.

“Real Inflation for the Vast Majority of Americans is Far Higher” Than What’s Being Reported: Steve Cortes Breaks Down Massive 25% Increase in “Necessities” Like Gas, Food and Utilities (VIDEO)

According to Cortes, who cites a Charles Schwab analysis on CPI for essentials like gas, food, and utility bills, the true rate of inflation is nearly 3x the 8.5-8.6% that is being reported. In reality, it’s hovering somewhere around 24-25% for everyday necessities that Americans cannot go without, he claimed.

These are the necessities grouped together – and this is a chart from Charles Schwab – this is [the true] CPI percentage, because I don’t believe this 8.5 or 8.6 number… I think real inflation for the vast majority of Americans is far higher. 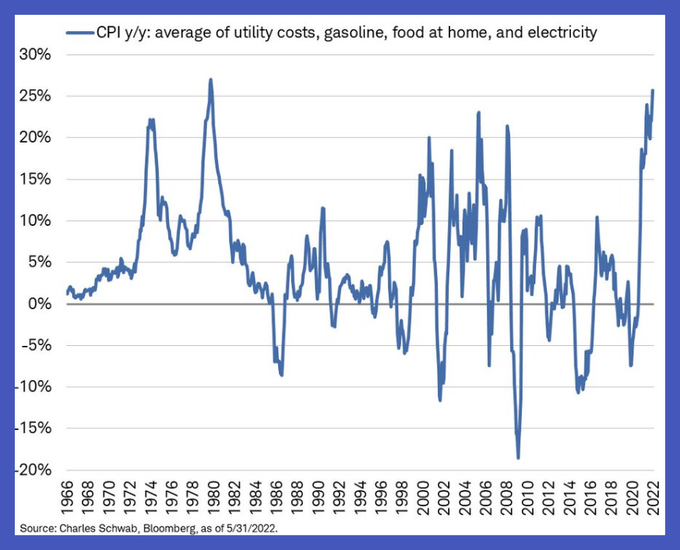 So, this is utilities, food – at home, not dining out at restaurants – and gasoline. These are necessities – these are things that people don’t have the luxury of passing up on to live in the United States of America.

And you can see on that chart – it goes all the way back to the 1960s – we are at a high since 1980. 25% percent inflation…That chart right there reflects the pain, unfortunately, of the American people.”

Unfortunately, the prospects of a turnaround anytime soon are looking bleak as Biden and the Democrats steamroll ahead with their destructive anti-American agenda. See the video.

Does Anyone Believe Big Media’s Claim That “Biden Inflation” is Maxed Out?