In the year 1516 there was published in Belgium a little book in Latin, written by an Englishman, which bore the title Utopia. The name of the Englishman was Thomas More, who two years after the publication of his book was to be made a member of the King’s Council, and eleven years after that, was appointed the Lord Chancellor of England. In 1535 Thomas More, whom of course we know today as Saint Thomas More, became a martyr for the faith, having been accused of treason and then executed by the king he had loyally served. His supposedly treasonous act was refusing to take an oath acknowledging the king, Henry VIII, to be head of the Church.

The name that Saint Thomas More gave to his book, “utopia,” was his own invention: it has its roots in the Greek language and can be taken to mean either “no place” or a “good place.” Utopia is a playful book, but for all that a quite serious one, for it was intended, among other things, to call attention to many questionable social structures, and abusive practices, that were characteristic of early sixteenth century “Christian” Europe. The Utopia Saint Thomas More describes for us in his book is an imaginary island country whose society could be considered in many respects to be ideal, for its people lead lives which are guided by reason, and this meant that they abided by the basic dictates of the natural law.

Saint Thomas More’s book spawned a new literary genre, or sub-genre, aptly called utopian literature, which is represented by such works as City of the Sun (1623) written by Tommaso Campanello, a Dominican friar, and by Francis Bacon’s New Atlantis (1627). Eventually utopian literature was to give rise to what has come to be known as dystopian, or anti-utopian, literature. The societies described in dystopian literature are far from ideal, and it would be an odd reader who could take a liking to them. Perhaps the two most famous dystopian novels in the English language are Aldous Huxley’s Brave New World and George Orwell’s Nineteen Eighty-Four.

The foregoing was meant to serve as an introduction to the main subject of this article – utopianism. In his book Politics and the State, in which he articulates a program for a specifically Catholic political philosophy, Thomas Molnar, for many years a professor at the City University of New York, cites utopianism as one of the prominent tendencies in modern political thought, a tendency with potentially quite dangerous implications. In sounding the caution against utopianism, Professor Molnar is not alluding to any possible perils associated with writing or reading utopian literature; rather he is calling our attention to a peculiar type of attitude toward political realities which today seems to have captured the imaginations of many theoreticians and government leaders.

What is this phenomenon called utopianism? I will offer the following definition: Utopianism is a certain attitude, or point of view, which has as its guiding belief the conviction that human society is perfectible, that it can be so shaped and organized that all the basic needs of its members can be met, and thus complete happiness for all is a realistically attainable goal. In sum, the utopian thinker believes that, if his grand plans for human society can be put into practice, man will have effectively established heaven on earth.

Utopianism is deeply rooted in the ideology of secularism. Indeed, it might be regarded as the political arm of secularism, for the utopian ideologue is a pragmatist who is dedicated to setting in place a political order where religion is totally marginalized, thus negating its influence. The reason why our modern day utopians are so intent on creating a heaven on earth is simply because they do not believe in the real heaven. Given the fact that utopianism is essentially an expression of secularism, it subscribes to a materialistic view of life, for secularism and materialism are pretty much inseparable. With his materialistic outlook, then, the utopian planner is incapable of thinking of the “good life” in any but shallow, materialistic terms, and that means that the brave new world which he wants to bring into being would be a radically dehumanized world, one in which spiritual poverty would be of pandemic proportions. 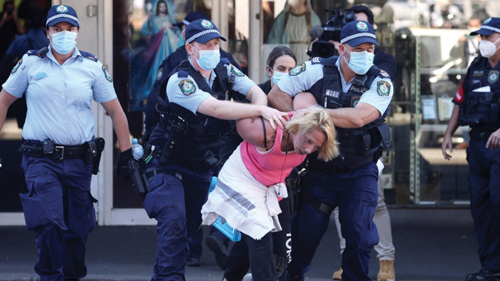 To the extent that utopian thinking takes hold in any society, freedom tends to be eroded – freedom for the individual, freedom for the family, freedom for those various societies and volunteer organizations which, according to the principle of subsidiarity, must be able to function autonomously for the sake of the health of society as a whole. This is because coercion is an important part of the utopian strategy. It would be naïve to regard the utopian thinker as no more than a harmless starry-eyed dreamer. Not so. He is a committed social engineer who is convinced that he knows what is best for humanity. What is more, he is a man in a hurry, anxious to bring about his transformation of society by the shortest routes possible, and that means he has no patience for trying to argue his case in the court of public opinion. Besides, he knows, in his heart of hearts, that the chances of winning his case in that venue would be negligible. So, the first order of business for him is to gain political power. Once armed with that power, he does not have to worry about persuading people to accept his manipulative schemes; he can force them to accept them, always, however, by following procedures which, superficially at least, are lawful.

The notion of the natural law is something quite foreign to the utopian planner, and that explains the antipathy he has toward the family and the state as natural societies, that is, as societies which have their ultimate origin in God’s providential plan for the human race. He sees the family and the state as purely human constructs; that being so, he reasons, what has been constructed by unenlightened man (i.e., pre-utopian man) can be deconstructed and remade by enlightened man (i.e., by himself, the utopian planner). The utopian looks upon the family as an obstacle to his grand designs for re-forming human society, for he realizes that the family is the protective source for the growth and nourishment of orientations and loyalties which are essentially religious. As for the state, specifically the government of the state, the utopian sees it as the most effective instrument for effecting his utopian designs. A utopian government attempts to center all power within itself, the better to carry out its coercive policies, and will tolerate no rivals, will brook no opposition. Thus, utopianism, once it gains the ascendancy, logically devolves into totalitarianism.

In sum, the “utopia” envisioned by utopianism is anything but a “good place,” and rather than being a heaven on earth, is disconcertingly suggestive of the nether place. The problem with utopianism is not that it would want to ameliorate the human condition – any conscientious Christian would have a mind for doing as much – but that it does not understand the human condition it is desirous of ameliorating. If they do not have, to begin with, a sound sense of what is right, people who want to make all right with the world can be positively dangerous.