After watching the league history-making games from the NFL’s divisional playoffs, the fans in our house anticipated an exciting pair of games that would determine which two teams would play in Super Bowl LVI. And they weren’t disappointed in the least.

Nebraskans are, generally speaking, part of the greater “Chiefs Kingdom”, as witnessed by the fan merchandise that is stocked in local stores from Walmart to Scheels, and everything in-between.

Still, the Chiefs-Bengals matchup made it hard to decide which team to support.

On the one hand, we have a young in-house Bengals fan, and the Bengals are writing a Cinderella story with up-and-coming quarterback Joe Burrow as well as former Nebraska star quarterback Zac Taylor at the coaching helm of the Bengals. This is a team which only two years ago inhabited the cellar of the NFL with a 2-14 record.

On the other hand, our friends and neighbors tend to be Kansas City fans, and the Chief’s story is pretty compelling as well. It has another rising superstar QB who has produced some amazing feats of football gymnastics in leading his team to the brink of a third Super Bowl.

Husker Star to Coach in the Big One 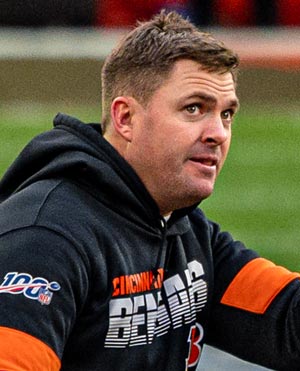 The game did not disappoint as to drama, with the Bengals quickly falling to an 18-point deficit and finally starting to fight back, just as the first half of the game ended. Being down 21-3 in the second quarter vs. the favored Chiefs gave the Bengals only a 5.2% statistical chance of winning.

Whatever Zac said to his tigers in the locker room at halftime made a huge difference. In the second half, the defense figured out how to stop the Chiefs’ offense, and Joe Burrow closed the gap to tie the game with only 14 seconds left in the third quarter thanks to a 2-point conversion pass.

In the middle of the fourth quarter, the Bengals gave Evan McPherson a 52-yard field goal shot to go ahead 24-21 with 6 minutes left. That should have been enough for the vaunted Mahomes and his Chiefs to run out the clock and put away the upstart Bengals with a clock-eating march (ending with a game-winning touchdown), but the Bengal’s staunch defensive heroics forced the Chiefs merely to tie the game, and it went into overtime.

Overtime rules favor the coin-toss winner, which (just as the previous week) the Chiefs won. But again the Bengals’ defense came up with a huge, and unlikely, Mahomes interception. This allowed Burrow to set up Evan McPherson’s title-winning kick and the Bengals odds-defying trip to the Super Bowl.

But that was only the first of the day’s dramatic games.

Rams Break a Losing Streak vs the 49ers

As former Southern Californians, our family was decidedly cheering for the Rams in the NFC Championship game, and once again the house favorite fell behind 17-10. It seemed the game would set up a rematch of Super Bowl XVI (1981’s 49ers vs. Bengals). However, the Aaron Donald-led defense stepped up, stopping the 49ers cold. The Rams’ Matt Stafford-led offense scored 20 points against a fading 49ers’ defense, including two touchdown tosses to Cooper Kupp. It was a rare Rams’ comeback victory. Under Sean McVay, the Rams are 2-23 in comebacks when they are 10 points+ behind in the second half – but both of these comebacks were in NFC Championship games! With this win, the Super Bowl-bound Rams snapped a 6-game losing streak against the 49ers.

This set up a most unlikely Bengals v. Rams showdown. It’s the first time in Super Bowl history that there is no top-three seeded team in the game. There will be two No. 1 overall draft pick quarterbacks facing each other, albeit one is definitely a veteran and the other is only in his second NFL season – and amazingly, in 2020 both quarterbacks played for teams that finished in last place with 11 losses.

To highlight how unlikely this matchup is, consider that, at the start of the season, the Bengals had 150-to-1 odds of winning the Super Bowl, while the Rams odds were 12-to-1 (the fourth best odds overall behind the Chiefs, Buccaneers and Bills).

Nebraska’s Star QB and His Path to the Super Bowl

For Nebraska fans, Bengals head coach Zac Taylor is one to cheer for. He called signals for the Huskers for two seasons and ended up being selected as the 2006 Big 12 Offensive Player of the Year. His Huskers.com bio says this about his contributions:

Despite being in a Nebraska uniform for just two seasons, Taylor concluded his Husker career as one of the most successful quarterbacks in school history, owning nearly every NU game, season and career passing record. In the process Taylor moved past great Husker quarterbacks such as Turner Gill, Tommie Frazier, Eric Crouch, Vince Ferragamo and Dave Humm in the Nebraska record books.
A native of Norman, Okla., Taylor directed one of the nation’s most potent offenses in 2006, helping Nebraska rank 14th nationally in total offense, 17th in scoring offense and 23rd in passing. He finished 2006 with a school-record 3,197 passing yards and a Husker-record 26 passing touchdowns against just eight interceptions. His 3,165 yards of total offense also set a new Nebraska single-season standard.

After not being drafted in the 2007 NFL Draft, his route to coaching came through Texas A&M, where he was assistant coach under his father-in-law Mike Sherman. In 2012 he was hired as Assistant Quarterback coach for the Miami Dolphins, and in 2016 he was hired by University of Cincinnati to be the Offensive Coordinator. He came back to the NFL in 2017, coaching wide receivers and then, in the 2018 season, quarterbacks for the Los Angeles Rams under the coach he will face on Sunday, Sean McVay.

After a loss in the lowest scoring Super Bowl in history while with the Rams, he was hired as head coach of the Bengals in 2019, leading them to a 0-11 record and the worst start to a season in Bengals history. However, their 2-14 season-end record set them up with the first overall pick in the 2020 NFL Draft, and the Bengals started the 2020 season with their coveted pick, quarterback Joe Burrow. That season was disappointing, with Burrow going out due to an ACL injury in week 11 and the Bengals finishing another losing season 4-11-1 overall.

The 2021 campaign has set up a fairy-tale story for a playoff-starved franchise, with the decidedly underdog Bengals securing the AFC North title due to a Week 17 victory over the Chiefs, and then making it to the Big Game after a pair of incredible come-from-behind victories led by Burrow and his receivers, all of it secured by the amazing kicking talent of Evan McPherson. Coach Taylor will have his work cut out for him against his former boss, Sean McVay, so stay tuned for what promises to be an exciting finale to an amazing season when the youngest pair of coaches in Super Bowl history face off against each other.