Pfizer’s own COVID-19 “vaccine” trial data demonstrated a heightened risk of sickness and death among the injected, according to the Canadian Covid Care Alliance, a group that describes itself as a coalition of “independent Canadian doctors, scientists and health care practitioners … committed to providing top-quality and balanced evidence-based information to the Canadian public about COVID-19.”

The Alliance’s stated goal is to reduce hospitalizations, to save lives, and safely to restore Canada “as quickly as possible.”  To that end, it produced a 39-minute video laying out the evidence against Pfizer’s COVID-19 injections.

Dr. Robert Malone, the prominent U.S. virologist, scientific author, and inventor of mRNA technology utilized by Pfizer in its COVID-19 product, brought the video to wider attention (and was shortly thereafter banned by Twitter).  Entitled “The Pfizer Inoculations  for COVID 10 — More Harm Than Good,”  it reveals the serious medical risks associated with COVID-19 injections.

His perspectives regarding the COVID-19 pandemic have generated enormous support and controversy.  His Twitter account had some 500,000 followers prior to its abrupt removal.

The independent journalist “Kanekoa The Great” breaks down the key takeaways from the Canadian Covid Care Alliance video and companion PDF in the following article.  It begins as follows:

The Powerful Pfizer Presentation That Got Dr. Robert Malone Kicked Off Twitter

Pfizer’s own vaccine trial data shows an INCREASED risk of illness and death for the vaccinated.

The Hierarchy of Scientific Evidence 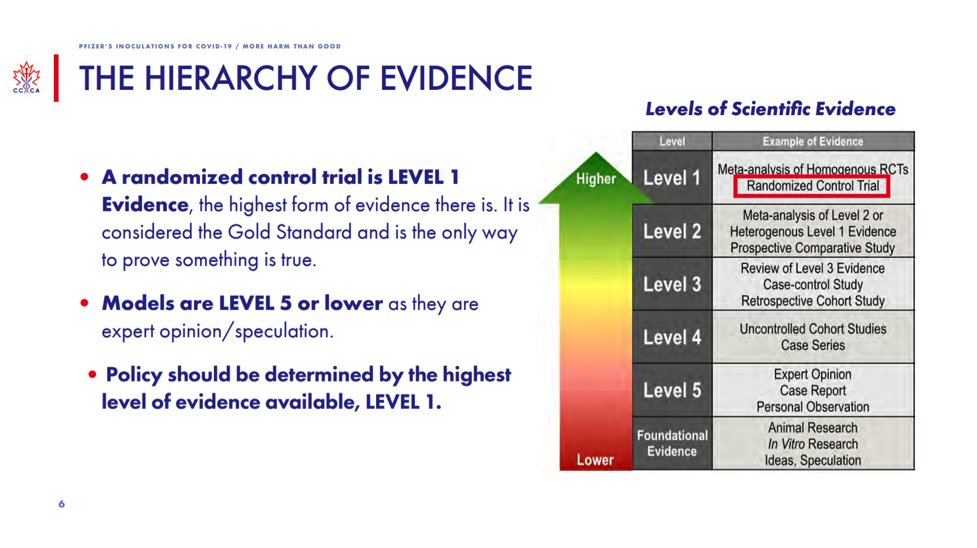 When you are talking about proving things to be either safe or harmful, you need to rely on the best evidence. As you can see from the table below, a randomized controlled trial is considered the gold standard or level 1 evidence. This is the highest form of evidence there is and the only way to prove something is true. Models, which we have heard a lot of during the pandemic[,] are actually the lowest form of evidence, level 5 or lower, as they are considered to be expert opinion or speculation. The policy should always be determined by the highest level of evidence available which is level 1.

Read the rest of the article