The Nebraska Voter Accuracy Project (“NVAP”) has gained the attention of Bob Evnen, Nebraska’s Secretary of State (“SOS”), whose duties include overseeing elections in Nebraska. The NVAP made several claims about the integrity of Nebraska’s elections that Secretary Evnen has addressed in a PowerPoint presentation that he sent to all the Nebraska Senators and has posted on the SOS’s homepage. He also talked about it in a series of interviews with Paul Hammel, who writes for progressive non-profit media outlet Nebraska Examiner. 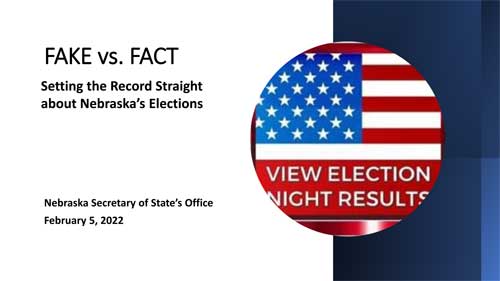 The Nebraska Secretary of State’s Office produced a 19-page PowerPoint dated February 5, 2022, titled Fake vs. Fact. The presentation goes through a number of the claims made by the NVAP alleging with graphs and counter claims, that the following are inaccurate, including:

The PowerPoint concludes by stating the SOS’s office is “fully informed of the concerns and claims that have been raised and has carefully investigated them.” It adds that the office would fully cooperate if the legislature directed them to do a “full forensic audit” or hand count of the ballots. They also noted that the legal requirement to keep the 2020 election ballots secure for 22 months expires on Sept 3, 2022.

Secretary Evnen has been interviewed by Paul Hammel, a veteran political and sports journalist who works for the Nebraska Examiner, regarding claims about the lack of election integrity in Nebraska put forth by the NVAP and others. Through this article and in testimony before the Nebraska Legislature’s Government, Military and Veterans Affairs committee, Evnen has reinforced some of the major points his Office made in the PowerPoint.

Nebraska Examiner articles are published to the public domain under a Creative Commons license and are often picked up by other news organizations and have been republished by multiple online and print publications, from The Omaha Daily Record to the Panhandle Post, and is referenced by groups such as Civic Nebraska, who are applauding the SOS’s Office for “holding baseless insinuations of fraud to the light.”

Many others, however, attended the recent hearings on various election related bills before the legislature and cried “not so fast,” calling the SOS’s PowerPoint and testimony more propaganda than real answers.

The Cornhusker Guardian will publish any response by the NVAP to Secretary Evnen’s report.